I found an old hat project I started on a couple of years back, which I never finished because it kind of failed… Now, three years later, I realized that it might be able to get something out of it anyway.

The Lansquenette hat is a kind of unique, as in that its not one of the most common ones to be seen , the concept and construction is popular, and I have seen a lot of trossfraus all over the world wear something similar. 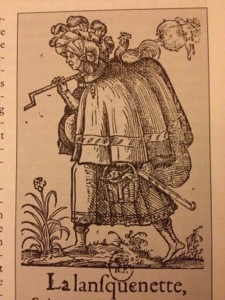 As you can see, the hat has its slashing slightly shifted, creating a spiral slash pattern.

The first tryout I made was just a rectangle with straight slashes, since I had the idea of then sew them into a tube, flatten it, shift it, to make it look like the woodcut, and then simply stitch it in place. This didn’t work at all…

So my next try was this; 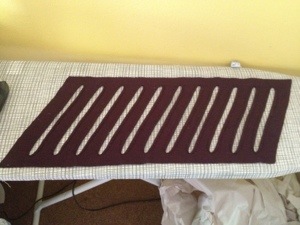 I instead cut the slashes diagonally and sew it all into a tube, fold it…

And tadaa, it worked!

This is when it kind of failed a couple of years back; the fabric I have use is to light weight/thin and it’s just hang there like a sad starfish.

So *drums* …years later I suddenly decided to try to reinforce the fabric, by simply adding a thick linen on the backside of each slash, which made the construction much sturdier and less floppy.

I then added silk on the inside

Stitched it in place and fold everything back and sew the inner side together. 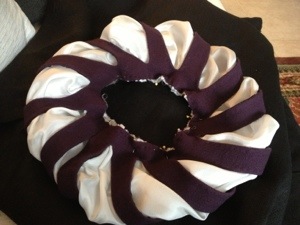 The next problem is though that the brim is still to floppy; 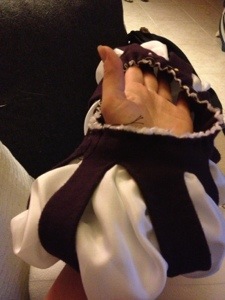 I got the idea from the woodcut by Erhard Shoen, 1535

Which hat looks like its a piece of fabric, simple gathered in the middle by a pull string.

Next step is to figure out the top of the hat, since the woodcut doesn’t show any of that part, I kind of thought of adding the popular folded square (that makes it looks like a square with a flower pattern. 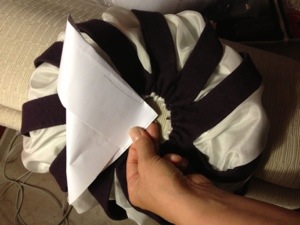 …here I use a quarter of a paper to get the idea of what size I needed, but the size I wanted to have, didn’t have me any good way of attach it to the hat without stitch it through the slashes, and that wouldn’t give enough sturdiness and would make the hat pull weirdly when wearing it.

So I decided to make a basic 16th cent construction, and was inspired of the pattern from this woodcut (which is about 50 years to early, but decided to be a bit anachronistic and ignore it …just to finish the three year old hat project) as you can see, the hat is worn by a male person, but since I have seen so many examples of unisex hats, I it feels kind of okey anyway)

Trying out the paper pattern.

cut out two round piece, one with the pattern of my choice, and one with a whole in it (this is the one that connects the top to the brim)

Attach your silk (or fabric by choice)

Turned everything and finishing the sides, then attach it to the hat;

Improvements to be made for the next one;
– use a thicker wool
– use wider and lesser amount of ‘bars’
– make the width of the bar rectangle a little more narrow, maybe around 20 cm instead of 25 cm